What do we do without access to our own guru, mentor, or someone capable of bringing us to a higher level of understanding? Well, if we steadily put our attention on the right ones, books can be great guides.

It’s been written in these books that we’re all the creators of our own life, although most of us are not conscious of this, blame outside forces, and take little or no responsibility for things that happen to us. We think it’s so easy this way, although we’re not even conscious that that’s what we’re thinking.

And then there’s a small group of people who have a gut feeling, an almost overpowering feeling, that what is is far different than what could be. And this overwhelming gut feeling spurs them on. They willingly take the bull by the horns, so to speak. and, step-by-step, harness the patience and effort, and whatever else it takes, to change the way they see the world, to change the thoughts they think moment-to-moment about themselves and everyone else, and ultimately establish a new way of consciously living in the world. Again and again we’re reminded by these people that we’re all capable of doing what they’ve done. In fact, evolving is what we’re supposed to be doing, and therefore, we’re more than capable of getting ourselves from unconscious to conscious living. Nice, right?

Walk around city streets and it’s obvious that the majority of people are not too happy with. . . . Name anything and it’ll most likely fit the rest of the sentence. One area of distress is the physical body, lack of energy, irritable bowel syndrome, all kinds of allergies, anxiety, autoimmune disorders, bloating, constipation, body odor, cancer, diabetes, diahhrea, eczema, fibromyalgia, heart disease, joint pain, toxic overload, stress, thyroid dysfunction, and more.

Okay, I’ve taken the above from the index of the book CLEAN by Alejandro Junger because, in the clearest and most interesting of ways, he addresses humankind’s health problems. CLEAN is wonderfully enlightening, and I”m kept busy underlining and trying to take it all in before beginning the three-week detox program. Anyone suffering in any way – mentally, emotionally, physically, soul hungry – CLEAN addresses just about every human distress. Not ready to detox? – read the book, plant the seeds, learn and absorb – for now.
The following websites are from the book:
www.cleanprogram.com
www.cancerdecisions.com
www.debraslist.com

Most of us can use an injection of instant enthusiasm, right? Reading the book The Mother of Invention by Neale Donald Walsch just about guarantees that we’ll get it. The back jacket of the book reads: “A biography unlike any other, The Mother of Invention tells the story of every human being now on the earth . . . through the telling of the life story of futurist and visionary Barbara Marx Hubbard. We are all moving through the same process, the book and it’s subject declare, it is the process of the birthing of our species.” this is not just any biography. You’ll see, if you decide to read it.
More wonderful websites:
www.evolve.org
www.HealYourLife.com 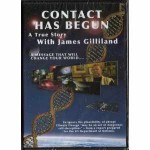 The above DVD has quite a full title. Are you interested?

Every so often I pick up a book or a DVD about UFOs. I feel that since we’re part of the Universe, it makes sense to know what’s going on, as much as we possibly can. There are many people who are giving considerable time to the study of UFOs, and in the process are finding out much more. It’s just about impossible now to leave this topic on the back burner. “. . . The Times CNN poll stated that 80% of people believe that UFOs are real and that there’s a government cover-up.” This was noted on the DVD which came out in 2007. Since that time, it’s been reported that there have been numerous UFO sightings by many people in different areas of the world. And so I watched and listened attentively to CONTACT HAS BEGUN A True Story with James Gilliland . . . A MESSAGE THAT WILL CHANGE YOUR WORLD, knowing that it was written and produced by people who care deeply about the Universe, particularly what’s happening to Planet Earth, and who also care about our role as evolving human beings.

Watching and listening to the people who had a part in the documentary was easy and exciting, especially since years ago Hollywood movies and the powers that be put fear into anyone wanting to know more about UFOs. And I began to realize while viewing the above-mentioned DVD that our past knowledge about UFOs hardly holds true.

What should be of interest to all of us is what it has to tell us about: the human race, consciousness, other dimensions, Planet Earth’s distress, UFOs, climate change, ancient civilizations, spiritual awakening, technology, our connection to everything, “the funding of Hollywood,” the military, earth changes, the messages we are being given, etc. I can only imagine what has happened since this film came to market in 2007.

Somewhere in the watching and listening it becomes evident that we need to make necessary changes in order to move forward and to evolve as we’re meant to do. To rescue Planet Earth, the consciousness of every one of us needs to be brought to a higher frequency so that we can work harmoniously together. It would seem that in order to do this we can’t live passively, or in fear, or allow negative thoughts to rule us. It’s been said that when our thoughts are negative we keep ourselves and Planet Earth at a very low frequency.

Also, it seems to be to our advantage to put away some of the “toys” we depend on for entertainment. So much time goes to entertaining ourselves with things that, in the end, leave us dissatisfied and keep us from knowing things about ourselves that, to put it frankly, are awesome. It’s been said that daily allowing for private time and journal keeping in order to ask ourselves questions and be willing to hear the answers about ourselves can restore us to a higher frequency, and when that happens, we can expect, well, I think you know what. And then we can begin to eliminate fear, and start to do the things that in our deep-down private moments we know we’re capable of doing.

From what I understand, as long as we’re not hurting anyone, the way we want to live life is absolutely our choice, and the choices are unlimited. It’s everyone’s birthright to dig deeper and deeper into the how-to of living a life of joy, peace, wisdom, beauty, loving-kindness, and abundance. It seems though that fear keeps most of us from living extraordinary lives.

The Universe is wonderfully fascinating and we all have to dare to expand our relationship to all that is, and who we are, and where we’re going. Living in kindness, harmony, compassion unconditional love, beauty, forgiveness will align us to a higher frequency, and together we’ll restore Planet Earth to the dignity it once had, and in the process, we’ll realize that we’re so much more than we imagine ourselves to be.

I’m glad I had the chance to watch and listen to:

If you opt to view CONTACT HAS BEGUN . . . , or another DVD of that ilk, sit, watch, and listen carefully til the very end. You just might be glad you did.

I hope the day is an absolutely lovely one for you.

We arrive at truth, not by reason only, but also by the heart. – Blaine Pascal

Don’t play for safety – it’s the most dangerous game in the world. – Hugh Walpole

The greatest gift you can give the world
is your own growth into the full consciousness
of your own possibilities – and ultimately
the evolutionary possibilities of the
whole human species. – Alan Watts