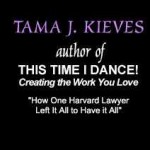 Tama Kieves’s eletters are refreshing, I think because she never hesitates to punctuate them with an abundance of honest enthusiasm. She wants everyone to feel the exhileration she experiencess in her own life. This earnestness is felt in all her writings, workshops, and, I bet, the one-on-one coaching sessions. She wants people to know that there’s another way. Again and again she tells the story of how she transformed her own life. She speaks from experience when she says to listen to your own “inspired voice,” that “there’s nothing safer than listening to your own heart.” Many people aren’t passionate about what they do in life, as once she wasn’t, so she gently pushes with her words, and eventually she hopes a glimmer of light will shine so that someone who once believed in a dream will begin to resurrect it.

She never meant to graduate from Harvard Law School; she allowed herself to be coerced into going. She wanted to write. It took a little while for her to extricate herself from the long hours, stress, and the emptiness of having a job she never wanted or liked. And it took a while for her to remember her dream, and to gather the courage to do something about it. There’s an authentic aliveness about her because she dared, believed, and then changed her life. To put it mildly, she’s a happy camper now.