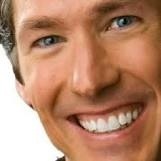 Did you read about the preposterous spam: “Joel Osteen Hoax: Man Allegedly Behind Ploy To Discredit Leader Wants Televangelist To Change His Message”? It had Joel Osteen abandoning his faith, and fleeing his congregation. And I ask myself, does the spammer have nothing else to do than to waste that amount of time doing what he did by sending biting words – supposedly from Joel Osteen’s mouth, along with pictures seeming to agree with the words – around the online world?

The following was Joel Osteen’s response to this pretend headline: “I’m really not angry; I don’t feel like a victim. I feel too blessed; life is too short to let things like this get you down.” Now that’s a perfectly simple response – one that we might want to memorize, and say with gusto, whenever we feel like a victim. Because we, in the modern world, tend to get offended rather easily.

When all was said and done, it was reported that the spammer said: “Joel doesn’t talk enough about the environment and poverty. He’s just too positive and smiley.” You gotta laugh; what else is there to do? Though the question that comes to mind for the spammer is: Why did you spend so much time doing what you did when there’s a call for ALL OF US to do our share, in whatever way works for us, to fix what’s been called, “our broken down” world.

When I had a TV, I enjoyed seeing Joel Osteen’s contagious smile and listening to him, because he has a talent for getting his message across with stories and laughter. What’s not to like?

“Joy is not in things. It is in you. – Richard Wagner

“We choose our joys and sorrows before we experience them.” – Kahlil Gibran