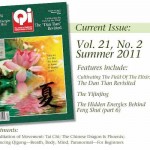 There’s an excellent seemingly endless stream of information on how to heal body, mind, and spirit, and keep the balance, and the information is utterly exciting. With that in mind I strolled into a bookstore and checked out the July/August 2011 issue of Ode Magazine. For Intelligent Optimists is written on the cover of Ode. Therefore, keeping an open mind on all that’s offered to the reader in any given issue is part of the enjoyment of reading Ode. It usually reports on people who are thinking outside the box, people who excuse themselves from the every day way of thinking so that they’re able to implement exciting changes in the area of their expertise. There are a lot of magazines out there, and month after month a lot of magazines offer the same kind of articles – different words and pictures, but the same. Ode is not the same.

What to read first? – is always the question. Ahh, let’s begin with biophotons . . . “faint light waves emitted by cells, to help the body heal.” The article features Johan Boswinkel who “believes Biophoton Treatment – healing with light – ‘should become primary healthcare.’ ” It’s a Wow! story by editor-in-chief, Jurriaan Kamp, and anyone having thoughts about how to treat a particular health problem might want to read the article beginning on page 27. Discoveries pertaining to body, mind, and spirit, and the possibilities for healings that they present, are causing us to stretch our imaginations and open ourselves to the Universe’s offerings way beyond the way we once perceived things.
www.odemagazine.com
www.biontology.com

In that same issue is a wonderful article about Sri Sri Ravi Shankar by Ursula Sautter on the need to “spiritualize politics, socialize business and secularize religion.” He talks about laughter, meditation, and, something that’s of great importance to all of us during the day, breathing deeply and powerfully. The not-to-be-missed articles go on and on in Ode.
www.ravishankar.org

When there’s a newspaper, magazine, or book about Feng Shui in sight of someone, I’ve noticed that people will pick it up and begin reading; most of us find Feng Shui a fascinating topic. In Qi The Journal of Traditional Eastern Health & Fitness magazine Spring 2011 there’s an article by James Frank Loretta called The Hidden Energies Behind Feng Shui. It’s the 5th in a series of reprints from his book with the same title. I think that anyone remotely interested in Feng Shui will be glued to the article. And the book, well, I just might have to get it.
www.quantumfengshui.org

One other consideration before wishing you all an extraordinary day is this, on page 3 of Qi magazine: “A 1,800-year old Chinese herbal remedy for an upset stomach may boost the effectiveness of chemotherapy while reducing its side effects, according to a study conducted by researchers from Yale University and published in the journal Science Translational Medicine.” The herbal remedy is “known traditionally” as Huang Qin Tang.
www..qi-journal.com

Ahh, the wonder of it all!

Y’all have an extraordinary day now.

* * * * * * *
“He built an instrument that can measure disturbances in the body and correct them. Using that instrument, he and the hundreds of people he has trained in the past 20 years have helped thousands of people banish serious diseases and troublesome ailments.” – Standing in the Light by Jurriaan Kamp

“DON’T FORGET TO BREATHE Sri Sri Ravi Shankar developed a simple but effective breathing technique, the Sudarshan Kriya. ‘it dissolves the deeper stresses in our bodies and cleanses the system from the inside,’ he says, ‘A stress-free mind and a disease-free body are the birthright of every human being.’ Regular practice reduces levels of the stress hormone cortisol and the stress indicator lactic acid.”
-Celebrate harmony in diversity by Ursula Sautter

“Our civilization prides itself on having subdued Nature. We move mountains and clear forests with no real intelligent design, without regard for the age old balance of Yin and Yang, without awareness of the principles of the ancient wind and water science: ‘For example, the presence of mountains reduces the incidence of strong winds which blow topsoil away, exposing barren rock and sand on which nothing will grow, while the mountain, in addition to shielding from the wind, also brings precipitation which nourishes life.’ ” -The Hidden Energies Behind Feng Shui by James Frank Loretta

“. . . there is now a growing interest among Western researchers in uncovering new applications of traditional healing techniques, from herbalism to acupuncture to yoga. This shift is based in part on the realization that traditional medical practices have been healing people far longer than Western medicine has.”
-Chinese Herbs Proven to Help Halt Cancer. page 3, 6 Qi