There are a lot of reasons I like Cuenca in Ecuador, and the relationship is ever evolving.

At the moment it’s thundering and the rains are about to fall heavily. I’m trying to be blasé about rain and being caught in a downpour, usually without an umbrella, because I watch the Ecuadorians take it in their stride. For the most part, they’re a patient people, and they teach the art of patience to foreigners.

There have been a few taxi drivers who have no qualms about giving a foreigner the hairy eyebrow. Happily they’re the exception. I don’t mind, I just sit quietly in the taxi knowing that most taxi drivers are glad to practice speaking English, or teaching Spanish, during the ride along streets whose names I’m learning to pronounce. And the cost of the ride? That seems to be a little game we play when we reach the destination – a game I’m becoming fairly good at. 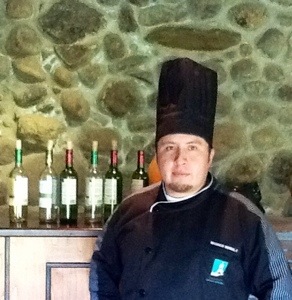 Have you heard of Todos Santos? It’s another reason to like Cuenca. Todos Santos is a restaurant (actually more than a restaurant) I had the pleasure of dining at on 5 November with five wonderful friends. Ellie and I were the first ones to arrive, and we met gracious Mauricio. He was standing in a very large and lovely and very old hall. He told us to follow him downstairs to the room where dinner would be served. He showed us the organic garden nearby. Mauricio spoke fluent English – he had lived in Chicago for five years. Now he was chef/ waiter/bus boy/storyteller, and whatever else was needed for a customer’s dining pleasure. A large group of diners entered and Mauricio left us, but not before we had the glasses of wine we had ordered. Being in that room felt good. Marion, Cindy, Lorraine, and Frank, who was visiting from Oregon, arrived – prepared for,a scrumptious meal because they’d heard good things about Todos Santos. We all chatted for a while, and then Mauricio was back with menus. He talked about the food and the big stone oven that was used many decades ago by the nuns, and now used by him. When dinner was over (suffice it to say that we all enjoyed our meals), and we were the only ones left in the restaurant, he regaled us with the history of the convent and church which now also houses a little shop and the panaderia-restaurant. The bread is still made exactly as the nuns made it many moons ago. The old church has been under renovation and is scheduled to reopen soon. And the convent which used to house a hundred nuns, now has six living there. There are quite a few unoccupied rooms at Todos Santos. I would love to know the history of those rooms. Another time perhaps.

Today I went to Todos Santos to take a picture of Mauricio. It was packed – there was “no room at the inn” for one more diner. When you come to Ecuador, don’t leave before dining in Cuenca at Todos Santos – it’s not just about food; it’s also about history and Mauricio, and the way Todos Santos is evolving. I think you’ll like it.
Direccion: Calle Large 5-19 y Mariano Cueva

And so, almost every day the reasons for liking Cuenca unfold in the nicest of ways.

I hope your day was a lovely one.

You can either bend with the inevitable sleet storms of life –
or you can resist them and break! – Dale Carnegie