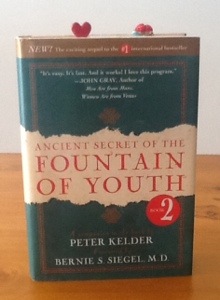 It could be that some people might consider not buying ANCIENT SECRET OF THE FOUNTAIN OF YOUTH because of the title. Though once the book is opened, a treasure trove is revealed. Book 1 tells of how it all began. It’s a marvelous story, almost in the category of a delightful fairy tale. It’s a story that you’ll want to read before picking up Book 2 “A companion to the book by Peter Kelder.”

It’s written in Book 2 about Book 1: “. . . It is not essential for you to read it, but it is highly recommended that you do so. In Kelder’s book you’ll find inspiration and magic that can’t be duplicated here. Many people who read the book cherish the experience and return to reread it again and again.”

There are amazing stories of those adventurers who dared to wander into territory most people thought they could only dream about. And then there are the amazing five rites which are fairly simple to do and which have innumerable benefits. The only way to discover their power is to practice them yourself. It’s one of the few books I took along with me to Ecuador. That’s how much I like the book.

To give you a glimpse of what the five rites do, I’ll quote the inside cover:

“In this book, readers were introduced to the Tibetan Rites of Rejuvenation, a series of exercises developed over centuries in the monasteries of Tibet and credited by thousands for everything from increased energy to better memory, weight loss, and just looking and feeling younger. Almost as quickly as the books filtered across the globe, letters began to pour into Harbor Press requesting more information on these mysterious rites. Now more than ten years and two million books later, comes a comprehensive companion volume that addresses the unanswered questions of so many readers.”

It’s good to know what’s in the marketplace so that we can choose what works for us, right? Now, if I could find a normal yoga mat in Cuenca, I’d be on the floor practicing those Five Rites:-)