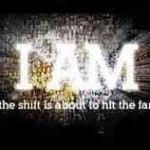 I’m sure it was with tongue in cheek, that she texted me, “greed is good.” I had to smile, mainly because I’d recently seen the acclaimed documentary film, I AM. Have you seen it? If you had, you’d know the reason I had to smile. I AM is a film unlike any I’ve ever seen. And right now I would like to be at the cinema watching it again because the film offers so much that a few more viewings are necessary to take it all in. The writer, director, filmmaker is Tom Shadyac, the director of BRUCE ALMIGHTY, THE NUTTY PROFESSOR, and ACE VENTURA: PET DETECTIVE.

There’s no doubt that Tom Shadyac is a very funny guy. He’s also a very serious one where some things are concerned. In the film we find out that I AM came about after the filmmaker found himself facing his own death after a very serious bicycle accident. With a prognosis he wasn’t ready to accept, he went to the ocean and sat on the sand, and proceeded to silently commune with himself. To find out what happened after that, you’ll have to see the “. . . surprisingly powerful and inspirational film” I AM.

It would take a very long time to sum up all the good parts, and write about the amazing people, in the film. And until you see it, I’ll leave you with something the filmmaker said: “We started by asking what’s wrong with the world, and we ended up discovering what’s right with it.” Also, this: “We are far grander than we’ve been told.” Perhaps you’ll want to listen to the videos on his website; they really shouldn’t be missed because, to put it very simply, he’s an awesome guy!
www.tomshadyac.com

An unusual exit from a theater: At the end of I AM the audience, instead of filing out, began hugging. Truthfully, it wouldn’t have occurred to me to start the hugging because I’m not a huggy kind of person in public places, but at that moment, after watching the film all those hugs seemed right.