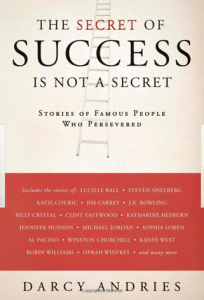 I’m reading a book now that I find really inspiring. It’s called “The Secret of Success is Not a Secret” by Darcy Andries. It is a brilliant volume of condensed biographies, about individuals in the world from different places who succeeded beyond a multitude of failures. Not one failure, or two, some people seemed to “fail” about ten times, thirty times, before even seeing a hint of accomplishment. These people had names like Issac Newton, Milton Hershey, Billy Crystal, Cole Porter, Barbara Walters, Nelson Mandela, Margaret Sanger, Jerry Seinfeld, Louis Pasteur, Steven Spielberg, Auguste Rodin, George Lucas — the list goes on. Most of them had failures that were more humiliating than devastating. Their companies folded, they were told they were talentless by countless agents, no one would accept them to their universities. Others had setbacks that left them disabled or incarcerated, but regardless the measure, they kept at it. Beyond their contributions to society, they are a good example of a saying I heard once, “The only time you are sure to lose is when you stop trying.”