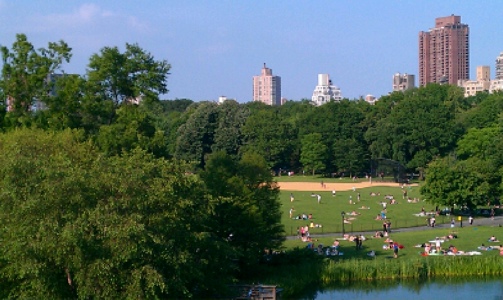 Daughter Emi’s photos tell a story. She has an eye that captures the essence of a person and place. Most times Emi has her camera with her, and should that not be the case, the phone’s camera and Emi’s eye will more than suffice, because, you see, love and passion take extraordinary pictures. It’s been this way since she was very young. The following are from my iPad and phone, and I wish I had some of her other photos, but, alas, I don’t. 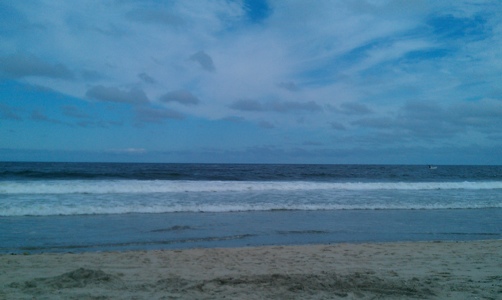 When the above photo was taken by Emi at Ocean Grove, NJ it was an unusually chilly June day, still, if I look at it long enough I feel my feet sinking into the sand as I wonder what’s across that vast ocean, then I see people are jumping into the waves, and lots of people are sitting on the sand perhaps dreaming, others are pointing to designs made by the clouds, sunbathers are making sandcastles and children are laughing as a friend is turned into a sand mermaid, someone is kayaking, families are collecting seashells, couples are riding the waves hand-in-hand. Now people are leaving. Lucky me I stayed and watched magnificent dolphins playing. The sun is setting now and I’m saying goodbye to a gorgeous day. Ah, yes, such is the magic of a photo. 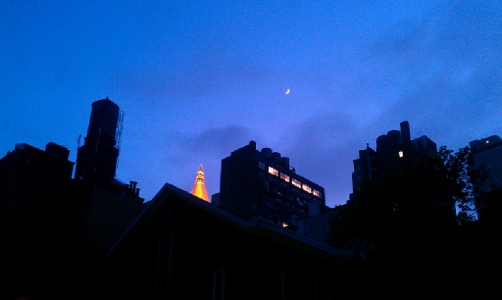 We were walking south in the 30s in Manhattan and It was a wonderfully light night, and Emi couldn’t resist capturing the sliver of the moon in its wondrous simplicity, lights were peeking through a few windows from very dark buildings. There’s a flicker of gold against the beautiful sky, to the right a tree is seen; it wants to be included also. This scene projects a sense of majesty at this moment on this night.

Emi is taking a last look at Philadelphia last Saturday as she leaves for Manhattan. The day was HOT! and it was HUMID! No matter, it looks serene. Nature is helping the people on the grass to relax – an abundance of trees, a soft blue sky, a bit of water will do that. The buildings are standing at attention, as if enjoying the scene, and appreciating the tranquility of a HOT and HUMID Saturday, compared to the busyness of a HOT AND HUMID Monday. All is well. 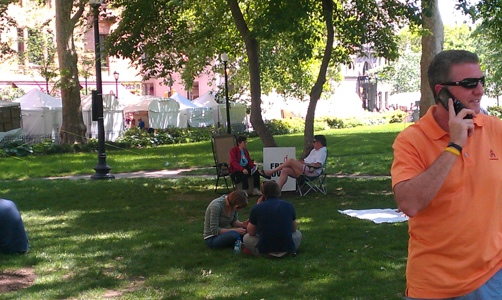 This is a casual scene in Rittenhouse Square Park in Philadelphia on Mother’s Day 2012. There’s a sign in the center where two people are sitting; it says: “free advice.” We laughed. It’s a neat idea, basically the sign tells nothing. So, someone sits facing the advisor, and then what? I like that. I wonder how much one pays for this “free advice.” the day is lovely, as is the art show surrounding the park. There’s a sweet expression on the face of the man in the orange shirt. Hey, why not, it’s Mother’s Day and he’s alive in this fascinating and mysterious world.

You might say there’s nothing special about the above photo. (lol, the above photo is gone! I’ll get it back. So, the first sentence of this paragraph is perfect.) And I’ll say, ahh, but . . . Emi took this picture a month ago as she was passing Paracelso because she knows it’s one of my favorite Manhattan shops. And that’s the reason I’d like to include it along with the other photos. Paracelso is not a run-of-the-mill shop; it’s very special to many people for quite a few reasons, as is the owner Luxor Tavella. Talk about staying power in the heart of SoHo where shops have come and gone through the years. Should you visit, don’t be put off by the face paint Luxor wears; she has her reasons. The following website will tell you a little about Luxor and Paracelso – www.stylelikeu.com/closets/luxor-tavella
Thank you, Emi.

Tomorrow is the 4th of July, what will you be doing?